Chow Chow, or Chow, is a breed of dog that originated in China, where it is referred to as Songshi Quan (Pinyin: sōngshī quǎn 鬆獅犬), which literally means "puffy-lion dog." It is believed that the Chow Chow is one of the native dogs used as the model for the Foo dog, the traditional stone guardians found in front of Buddhist temples and palaces. 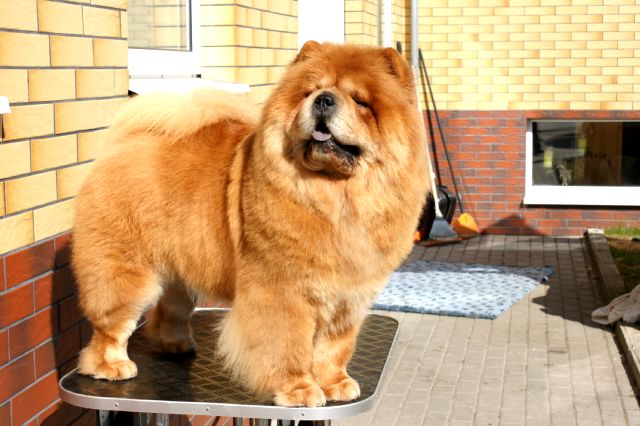 The Chow is a sturdily built dog that is square in profile with broad skull and small, triangular ears that are rounded at the tip. The breed has a very dense coat that is either smooth or rough. The fur is particularly thick around the neck, giving the distinctive ruff or mane. The coat may be one of five colors including red, black, blue, cinnamon, and cream. Individuals with patchy or multicolored coats are considered to be outside the breed standard. Chows are distinguished by their unusual blue-black/purple tongue and very straight hind legs, resulting in a rather stilted gait. The blue-black/purple tongue gene appears to be dominant, as almost all mixed breed dogs who come from a Chow retain the tongue color. This is not to say, however, that every mixed breed dog with spots of purple on the tongue are descended from chows as purple spots on the tongue can be found on a multitude of pure breed dogs.

Today the Chow Chow is most commonly kept as a companion dog. Their keen sense of proprietorship over their homes paired with a sometimes disconcertingly serious approach to strangers can be off putting to those unfamiliar with the breed. However, displays of timidity and aggression are uncharacteristic of well-bred and well socialized specimens. The proper Chow owner will be just as willful and stubborn as the Chow they keep, thus weaker-willed individuals would be best served to evaluate their commitment in controlling an animal who is happy to take over any household. Specimens of opposite sex typically co-habitate with less tension than those of the same sex, but it is not unheard of for multiple chows of both sexes to live together peacefully in a home setting. Chows are extremely loyal to their own family and will bond tightly to their masters. The Chow typically shows affection only with those it has bonds to, so new visitors to the home should not press their physical attention upon the resident Chow as it will not immediately accept strangers in the same manner as it does members of its own "pack". Chows are not a particularly active breed. Apartment life can suit this breed, if given enough opportunity for regularly scheduled physical activity each day. The Chow Chow may appear to be independent and aloof for much of the day, keeping a comfortable distance from others while staying within earshot, or preferring to watch for strangers alone by the entrance. Owners still need to be prepared to take a Chow Chow for a brisk daily walk, even if they have a fenced yard, in order to meet their needs for mental and physical stimulation. While the Chow exhibits low energy for most of the day, it will crave routine time to explore and play to maintain a happy and content disposition.

The chow chow is the dog race most affected by elbow dysplasia. They are also prone to hip dysplasia, patellar luxation (slipping knee caps), thyroid disease, and ocular disorders such as entropion and ectropion. The risks of such disorders increases exponentially when a chow is purchased from backyard breeders, pet stores and unscrupulous kennels that do not test their breeding stock for such genetic disorders. As such, a potential chow buyer would be best served to ask to see all health clearances for the parents of a litter up front. In the United States, these would be clearances from the Canine Eye Registration Foundation and Orthopedic Foundation for Animals; other countries will have other health testing schemes, and contacting the national canine registry association will provide that information. Reputable kennels should provide the new owner with a written and signed health warranty as well. Although there is no way to accurately predict the lifespan of an animal, one should expect the healthy chow to live between 10 to 12 years.